Florence, considered the home of Renaissance and the Italian art, is one of the most important tourist destination in the world thanks to its incredible beauty.

Mentioned even in Dante’s literally masterpiece the “Divina Commedia”, Monteriggioni is one of the most famous Italian medieval village thanks to its marvellous city walls ( 570 metres) and its 14 towers.

San Gimignano and its famous towers , thanks to their position, domain the beautiful Val D’Elsa hill. Site of an Etruscan village during the Hellenistic period (III – II century ), the city , that took its name from the Bishop of Modena city , San Gimignano, had first a fast growth in the medieval period , but then from 1348 it had to face a long crisis because of a terrible plague that characterized the following centuries. Just after a long period and thanks to its incredible beauty, San Gimignano regained its prestige that makes the city one of the most important artistic place in the world.

The city, founded by the Etruscan (VIII a. C.), became part of the Roman domain (260 a.C.) thanks to its fast economic and political growth. In the medieval period, Volterra got its independence till 1472 when it was gained by Florence. The long city walls ( 7 Km) and the Maschio castle lying on the evocative Tuscany hills, are still the proof of its important history.

The Crete Senesi, a wide area between Siena and Arezzo, are one of the most visited Tuscan districts thanks to its charming and moving landscapes.

The Chianti countryside, a particular Tuscan area located on the beautiful hills between Florence and Siena, offers one of the richest Italian wines, the Chianti classico, and an unique gastronomic experience. The old Chianti’s district, as Ferdinando III called this area, includes wonderful centres like Gaiole, Radda and Castellina in Chianti where you can admire evocative landscapes and long vineyards.

Important centre in Etruscan and Roman periods, was the object of a dispute between Florence and Siena that wanted ho have the control of this city. Its cultivations and its gastronomic products, like the famous Brunello wine, makes Montalcino one of the most famous centres in the world.

Is well known for the beauty of its buildings of the Renaissance, for the elegance of its churches and, obviously, for its “Vino nobile” one of the most appreciated Tuscan wines in the

Rapolano Thermal baths were already known in the Etruscan and Roman periods. Nowadays, you can find two different spas still working: the “Antica Querciolaia” and the “San Giovanni”. 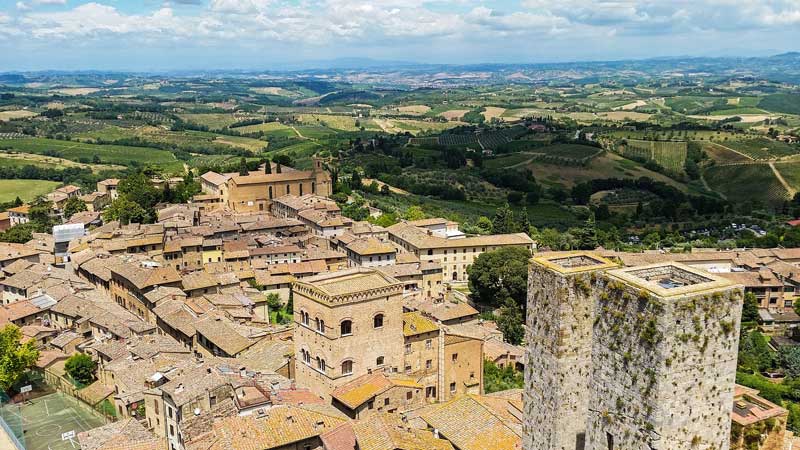 Pienza’s history is strictly connected with his founder , Enea Silvio Piccolomini who was born in 1405 in a noble family fallen into decay for political reasons. In 1996 Pienza, with its artistic endless beauty, has been declared a UNESCO world heritage site.